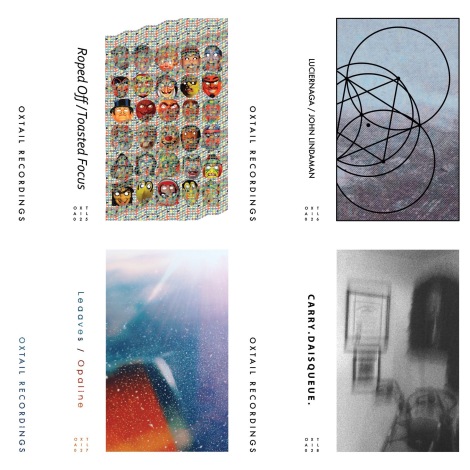 I’m still coming down from all that Long Distance Poison stuff – and by the way, my experiment was a total failure. I’m feeling a bit less Rheomode-y these days, a bit less March-in-New York. A bit more … summery? Yeah, that’s it! As luck would have it, there’s a perfect antidote for all the toxin I apparently ingested, and I am smiled upon by whatever deity wants me to be in a good mood all the time, the deity that understands my mood shifts and has the soundtrack to my every whim just an interstellar clickwheel turn (or, ahem, Walkman play button push) away. Sure enough, the planets have aligned and Oxtail Recordings has just released their summer batch – and just in time! It’s the middle of summer!

And guess what – these four tapes feature EIGHT entire artists! That’s right, all of them are splits, meaning we get to do a severely deep dive into the inspirations of Oxtail and the machinations that define its aesthetic. So let’s stop jawing, shall we? Let’s get to it.

Sporting perhaps my favorite band-name-referencing title since “The Kinks Are The Village Green Preservation Society” (or maybe “Archers of Loaf Vs. The Greatest of All Time”), Tabs Out Podcast’s own Mike Haley and Dave Doyen drop “Roped Off Gets Trapped in a Room with a Slug,” fifteen minutes of mind-melting synth work seriously caked with bong resin. Voices hover on the periphery, the slug makes its appearance, and everybody panics. Wouldn’t you? Mike and Dave then take on the slug Mortal Kombat style – probably losing. For the Toasted Focus half, Glass Frog’s Konrad Kamm and Oxtail honcho Mike Nigro present “God Bless,” what is described as a “summer storm in reverse,” and hot dog if that ain’t what it does! Two opposing fronts of dense synthesizer swirl around each other, the friction of the molecules causing great disturbances in the atmosphere, until the air begins to clear as the fronts move away from each other. Clarity ensues – that moment once the storm is just gone and everything appears in sharp relief. Maybe there’s a rainbow. Look, there’s a rainbow!

Joao DaSilva (Fabric Records) acts like he’s in a one-man post rock band (like Labradford or Stars of the Lid – well, they have more than one member, but you get the idea), and “Hesitation Blues Revisited” is a half-hour live performance of a dude and his guitars and amps and pedals and drones. Is “Revisited” an avant-garde take on the old folk standard? Shut up! Joao DaSilva makes Jorma Kaukonen look like a baby plucking its guitar like it has no idea what it’s doing. You know what Luciernaga presents to us? He presents the SHEER POWER of live drones, overwhelming in their density, and shot full of more grit and hustle than any other jagoff fumbling through pages of tablature. Sorry, don’t know where I went there. True Love Always’s John Lindaman kinda goes in the opposite direction, using harmonics and tones and layering them on top of one another to create a tense, mystical body of work on the B-side. His four tracks hover between guitar-based architectural skeletons and massive columns of crystallized sound. There’s no wrong way to go with any of them.

You might say I’ve been around the Opaline block before. And the Leaaves block too, actually. Still, familiarity never really prepares me for these guys, Hunter Peter Thompson and Nate Wagner, respectively, as I’m always surprised by how pleasant it is to revisit their works. I guess I shouldn’t really be SURPRISED, though, because if you’ve got an Opaline or a Leaaves tape, you know you’re in for some quality ambient synth work. No different here. Nate drops four gentle Leaaves tracks on the A-side, each one drifting – hey, like a leaf! Each one drifting like a leaf from the branch of an autumn tree, swirling in chill breeze in the sunshine, like wisps of memories on the verge of being forgotten. Opaline’s sidelong “Amaranth Valley” comprises the B-side, a full thirty-minute display of Thompson’s synthesizer magic. Lush drones reveal polyrhythms as they go, a true encapsulation of the Opaline aesthetic. You may want to shout joyously upon this tape’s completion, but I urge you to be patient, for my sake. I need external silence right now – I’m trying to listen to Leaaves and Opaline.

… Letting this one sink in … Carry and Dais Queue are Tyler Magill and Davis Salisbury respectively, one half each of Grand Banks out of Charlottesville, Virginia. Easily the most difficult release in this batch to penetrate, the sounds that emanate from this tape are equally steady and disorderly, sometimes all at once. Carry’s three tracks “carry” with them a sense of instability, as quiet ambient sounds become a static hum before receiving transmissions from pirate broadcasts (“Bethel”), the approximation of a train on tracks in a station builds from the ambient sounds preceding them (“The Train Station at La Conversion, July 16, 1983”), and samples of maniacs bellow through the haze (“Keep Moving Forward: The Law, Help Me”). Dais Queue hits back with a thirty-five-minute excursion full of deep wonderment: “I Took the Opportunity to Enter the Ice Cave.” Tones shimmer off frozen walls as Salisbury recreates the event described in the track’s title through sound, exploring each nook and cranny of the cave and allowing the reverberations to shape themselves and take on personalities. The result is majestic and stunning – like the center of an enormous ice cave!

Oxtail Recordings has chosen to bless our little lives with eight artists on four tapes instead of the usual one-artist-per-tape standard, giving us a veritable cornucopia of experimental music delights. Come join me as I revel in this bacchanalia known as Split City, won’t you? You’d be a fool not to embrace the whole batch.