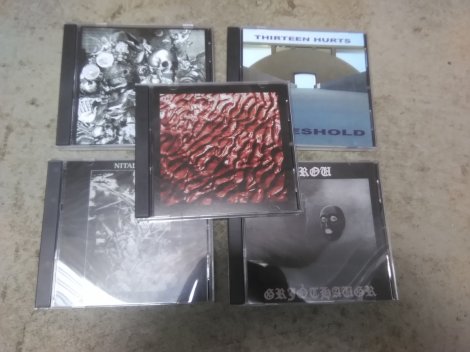 No stranger to this site, Arvo Zylo is an outsider music evangelist, releasing all manner of electronic, noise, and blackened disasters via his label No Part of It. Now that we’ve all gone underground because of COVID (or at least become masked – our faces have gone underground … well, some of ours have), it’s as good a time as any to familiarize yourself with the more antisocial artists to be found across the outsider spectrum. Arvo and No Part of It have us covered, dropping a whopping five new pro CDRs into the lives of us weirdo enthusiasts. Dude, that’s lots to be enthused about.

Thirteen Hurts is the moniker of an elusive artist going by “One-Eyed Zatoichi” (haha! Good one), and Threshold is a collection of intense material that’s been kicking around the No Part of It hard drives for a few years. (That copyright date of 2011 on the back of the CD is a dead giveaway.) But the scorching noise of dense electronics is evergreen, so we here in 2020 can still enjoy the Thirteen Hurts of the past. Here we find Zatoichi all over the map, with distortions rumbling like a swarm of bulldozers and tones piercing like a swarm of hypodermic needles. It’s mostly swarms you’re getting here, and the electronics manipulated and bent and amplified and effected interact with and build off each other in violently intriguing ways. I’m gonna be honest and note that I did a few double takes while listening to this thing, perhaps most notably to the seventeen-minute “Percolate,” which percolate it does! It’s like electrified death coffee by the end of it. Oh, no synthesizers. Don’t even say the word “synthesizer” around this release.

Meaning “hole” or “void” in French, Trou surely conjures the abyss. Over three incredibly lengthy tracks (they’re so long!) (my complaining is a joke), Trou turns gristle into surprisingly hypnotic loops, each one stretching it gets in your head and churns in there like a cement mixer. Only the most minor of shifts occur within the construction, so you’re left to hallucinate all the changes your brain is tricking you into hearing. And that’s OK – this is the kind of thing you can hook up and meditate to … well, if you’re so inclined to meditate to rippling noise loops. But still, as each track ends and the next one begins, you’ve become so sensitized to the previous one that the new one sounds like a wildly alien encounter, jolting you from your reverie as you scrabble to search for new psychological purchase. And then it’s right back into the “void,” once that next loop rolls over you.

Possibly the most fascinating release in this set (who am I kidding, everything’s friggin’ fascinating around here), Credo in Deum began life as Buddhist on Fire, and has released hard drives’ worth of material into the world. (You can find much of it on archive.org.) Beginning with a much more overtly rhythmic approach than a straight noise hum, Credo in Deum warps a captivating tale of vicious danger through your speakers with the harrowing “Battered Wife Syndrome,” a dynamic opener that pits the loud violence of the track’s title against periods of tense quiet, ratcheting up the fear. As the album progresses, the rhythm is dialed back in favor of crackling noise, when the dial is set to “rock crusher,” or malfunctioning diodes, when the dial is set to “Sodomized with Spikes.” (Yowza …) At all turns, regardless, Blood Soaked Sand crackles with wicked energy, a tense and volatile ritual. It’s worth noting that Credo in Deum changed from Buddhist on Fire as he switched his own personal credo from Buddhism to Catholicism. Also worth noting is that Arvo Zylo compiled this record from a variety of sources.

Haunting – that’s the best way to describe Nital Etch’s Simularcrum, and Arvo goes out of his way to suggest that the artist from the state of Washington would be scoring films if not for his distaste in “schmoozing.” (Alvo also suggests that the soundtracks would be to forgotten rotting corpses, so it’s not like we’re talking blockbusters here.) Mournful hums and lonesome strings lead us into the center, where noise roils over the repurposed instructional video-speak of “Barbara,” then Badalamenti shows up in an Argento film. So maybe it’s not just rotting corpses after all! (Although please explain why there seem to be so many ribcages in the cover art.) I’d include something from this in all my PBS Mystery! episodes if I was allowed back in my local affiliate’s building. (Don’t ask, long story.)

And it all comes back around to Arvo Zylo. Blood Rhythms is Arvo’s project, and I’ve gone head over heels about it before. This time he’s really cooked up a treat for us with Zerrissenheit, the recording sessions for which were done on John Cage’s first prepared piano. What?! That’s right, you heard me. Joined by a cohort or two throughout, Arvo does the Cage-ian “excessive layering and looping” until the piano itself spirals out of control and possibly into another dimension entirely, so eroded is the veil between worlds by the time you’re done with this thing. It’s noisy and rhythmic and hypnotic, broken only by the surprise of a music horn (a jazz one) somewhere in there. In all, and as usual, it’s a remarkably compelling and exhilarating listen, an outré treat for the mentally exhausted.

One response to “NO PART OF IT – New CD Batch”